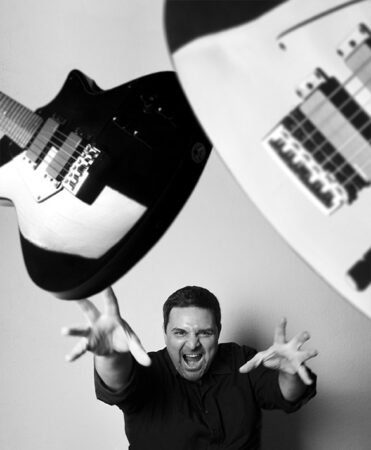 Leo Lospennato was born in Buenos Aires in ’68 -at the heart of an Italian family. He lives in Berlin with his wife Andrea and with Tango, their black miniature schnauzer.

The son of a technician and an artist, Leo became a bit of both things. Curious by nature and inspired by a Rennaissance spirit, he became an engineer at IBM, a magazine editor, a journalist, an artist, and the author of the modern, seminal books on guitar making. Truth be told, that “Renaissance spirit” also manifests as a shameless affair that he maintains with Italian cuisine—a mix of heritage and hobby.

But in the whole of this history, the one constant is his passion for the ancient art of creating musical instruments, an infatuation that began when he put together his first bass when he was 16.

The sound of a string vibrating for the first time; the magic of creating something out of nothing; the never ending search for beauty, for meaning, for perfection. Being a luthier does not requires more than that. Nor anything less.